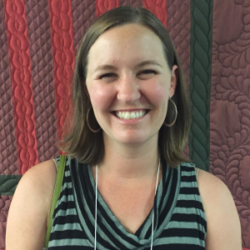 “I think it’s the most democratic (little d) form of energy because you can place it almost anywhere. Wind is great. Being in Texas, wind was super great. But wind is also a large-scale technology that you can’t make accessible to most people so I fell in love with it and it got into my blood. So as I like to say I may have studied liberal arts in college but I got in touch with my inner engineer afterward.” ~ Amanda Bybee, Namasté Solar

My guest today is Amanda Bybee, director of strategic planning and initiatives for Namasté Solar, which is an employee-owned solar installation company. She started there in 2006 as employee / co-owner number 5. Amanda’s going to tell us about the benefits and challenges of running an employee-owned company and also how cool her job is. I’m a little jealous actually. But first I want to share something with you.

You’ve Got the Power!

I’m trying something new with the podcast this episode. Each show will feature a couple of energy saving tips. I’m hoping to use this as a way to inspire myself to start tackling some of the problems with my leaky old house. Maybe you can join in and work on your leaky old house too. I’m not going to give you a big mind numbing list of ways to save energy. Just a couple of ideas each episode that you can try out before the next show. You’ll feel good knowing that you’re doing something real about climate change, or air pollution or mountaintop removal or whatever it is that bugs you about fossil fuel. And we might actually save some money in the process.

You can find out more about Namasté Solar at www.namastesolar.com.