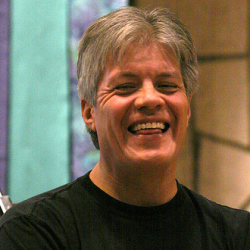 My guest is Karl Rábago, Executive Director of the Pace Energy and Climate Center at Pace Law School in New York.

By the time the year 2000 came around I was more comfortable in my career and in that year 2000 my granddaughter was born. My first so far and only, but I actually remember realizing that with a little bit of luck and decent health care she would see the year 2100 and I knew I never would. And it gave me pause to think that everything I do will impact what her life is like a hundred years from now. ~Karl Rábago

Karl has had a pretty interesting career so far. He’s served as the Texas Public Utility Commissioner and Deputy Assistant Secretary of Utility Technologies at DOE. He’s also worked at the Environmental Defense Fund and the Rocky Mountain Institute. And he was a U.S. Army Airborne Ranger.

KR: I’m Karl Rábago, executive director of the Pace Energy and Climate Center. It’s a project of PACE Law School in White Plains, New York. I’m also the co-director of the Northeast Solar Market Coalition or the solar coalition as we call it, an association of solar businesses seeking to harmonize market policy in the northeast United States.

DB: Can you give me a little detail on how you work with those solar businesses and what you can offer to them?

KR: Well I guess the first thing I should do is talk about the basic construct because this is unusual and I have nothing but great things to say about the U.S. Department of Energy’s Sunshot Initiative because they’re giving us support for this and they bought into our idea. At least enough to execute this cooperative agreement with us. Our premise, our proposition was that the nine northeast states collectively are as big a potential solar market as the state of California. We’ve all heard about how much solar is going on in California. But those nine northeast states, each is an independent unique market with a separate set of rules, conditions, permitting requirements and everything, policies, everything else. And our business associations in that region sat down together and said you know we have a common interest in a common policy. We shouldn’t have to stop driving our truck just because we get to a state line. We should be able to do business in these small states from one state to another. In fact you can be in five states in five hours in that region. So, they went to the Department of Energy and said we want your help in getting the business associations together in a coalition to identify the best possible policies for advancing the solar market and then we’ll reach out to all the other stakeholders. So instead of pre-diluting our position with traditional “one from column A, one from column B” stakeholder collaboratives, the business associations are going to bridge the gap. First identify the best policies and move forward from there. And then we’ll go forth and say this is what we think the best thing for the region would be. We’re finding out there’s a lot of regional cooperative efforts going on in our region and several other regions in the country. And I personally believe that that kind of regional cooperation is really going to push solar markets to their next level.

DB: So what are some of the policies that are at the top of your list so far?

KR: Okay. We actually have a list of eight but I won’t take you through all of them. They include things like, we ought to have common permitting platforms, the same issues are raised and the same processes are adopted, wherever we can.

Full Value of Solar Energy for Customers Who Install It

We should have similar policies relating to the qualifications required for solar firms and solar installers. You shouldn’t have to get a different license in every place you go or at least you should be able to work cooperatively under other people’s license for example. In terms of customer installed solar, full and fair compensation in terms of offset credit for your solar is key to the ultimate business proposition for customers. We’re saying value of solar is what’s needed, full value of solar for customers who install it. Which means that caps that are in place in different places don’t make any sense and those caps vary in terms of system size and total market size for no real good reasons any more these days. Of course we want to borrow from the great work by people like the Interstate Renewable Energy Council. Also been supported by DOE on standardized interconnection rules, basically the technical requirements. You know we’re getting better at this. The equipment is getting standardized, so should our policies.

KR: Exactly. The caps but also the system size caps to qualify for net metering. In some places it’s 20 kilowatts and in some places it’s 30 kilowatts. There’s no good reason for those kinds of differences. You know, once upon a time when we didn’t understand these things we were scared. I’ll give you an example. Once upon a time we thought tomatoes were poisonous. Then somebody tried some tomatoes and we tested some tomatoes and we found that they’re actually pretty delicious, especially with mozzarella, a little bit of olive oil. and some balsamic vinegar.

Once upon a time we thought a little bit of solar would disrupt the electrical integrity of the grid at the feeder level and below. We now know much better and we know what is needed. And the equipment is better and the inverters are better. And those early stop signs that were put in place when we didn’t know better don’t make any sense in a world in which we do.

DB: Tell me a little bit about the sharing utility.

KR: So the Solar Electric Power Association (SEPA), one of the industry trade groups, mostly utilities but also some solar companies, came up with this idea of something called the 51st state. They basically said, “Clear your head of these local fights. What would things be like in the 51st state, given what we know.” It’s very similar thinking to ours. And SEPA invited volunteers to submit concept papers on how solar would work in the 51st state. A friend of mine, Jim Kennerly, then with the North Carolina Sustainable Energy Association, now he’s with Sustainable Energy Advantage in the Boston area, and I sat down with some help from other people and their advice and wrote a proposal that we call the sharing utility. We picked up on a couple of things that are going on. The first one is that if you read the Harvard Business Review and Wired Magazine and things like that you’ll see some conversation emerging about the sharing economy or another term, collaborative consumption. We’re actually experiencing that with the internet today. We don’t all need to own a server but a lot of us depend on a lot of data. The cloud as they call it enables us to have data. So, I have, last time I checked, something like 17,000 pictures in my family history. I don’t store those all at home, I also store them on the cloud as a backup. We have shared concepts in technology and we realize that that same concept is connecting over the utility with the advent of technologies on roofs, like solar, and in homes like demand response and conservation and home energy management. There’s an opportunity for customers to go from being consumers to also being producers and some people have used the word prosumers. They’re combo entities, sometimes using, sometimes taking, sometimes doing both at the same time. If I’m now a resource for everything, generation, non-use, use, then I can also be part of the economy of these transactions and if I’m treated fairly and given value for what I’m doing I will enthusiastically participate. I will dedicate my personal investment dollars to that activity and we now have a sharing utility. If I can’t put solar on my roof we can take the next step and a group of us can band together in a community or shared solar installation. We can participate in an aggregated purchase. Everyone in my neighborhood could try to get a discount by buying a lot of solar at the same time. The ideas and opportunities for sharing in the utility industry are really, really big and I think it’s an important part of the formula for getting the utilities out of their current doldrums and giving them a new market opportunity that will benefit their shareholders. Otherwise they’re just going to face an eroding market share.

You can hear the rest of the interview by clicking the audio player or downloading the episode on iTunes or Stitcher.

Thanks to Karl for taking the time to talk to me. You can find out more about Karl by going to rabagoenergy.com.