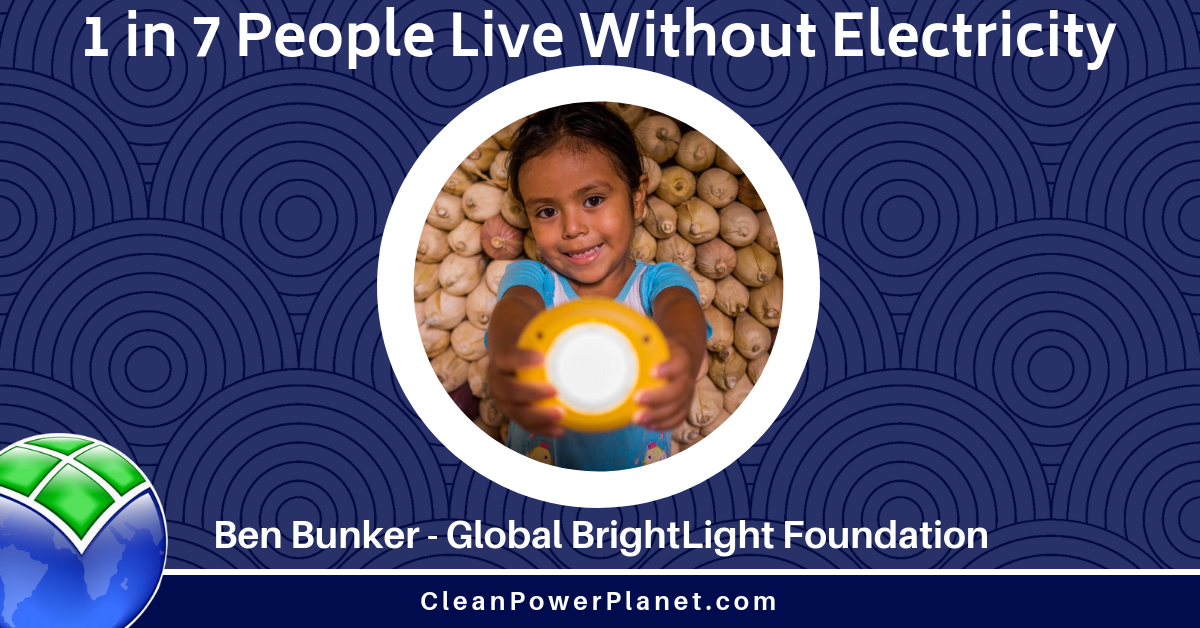 Ben Bunker is the CEO of the Global BrightLight Foundation, which provides access to affordable solar-powered lights to people living without access to electricity. Many of the people that they help live in very rural areas. They rely on kerosene, candles or even wood chips for light. BrightLight’s vision is a world with universal access to clean, sustainable, and affordable energy.

Ben: You know, those of us who have had the power go out before, whether because of a storm or something going wrong with the utilities, we’ve had this experience together but often it’s not one that’s a prolonged experience, maybe one or two days, maybe a week if you’re unlucky without power. And most of us resort to candles, flashlights or batteries. And so for a billion people around the world that’s actually every single day. It moves from being a minor inconvenience to something that significantly impacts their life in a series of different negative ways. I’ll give a couple of examples. One is economics. Some folks are spending up to 25% of their income on candles or kerosene or batteries every single month. When you only make $100 and you’re living in Guatemala or Peru, that $25 represents a significant amount of your income.

David: So, you said over a billion people?

David: And there are what, 7 billion people on the planet?

Ben: Every day there’s more but that’s a good round number.

David: So this is one out of every 7 people that doesn’t have electricity.

Ben: Whether you’re in a waiting room or you’re in traffic or wherever you are just imagine that one out of every seven of those people is going to go home to a house without electricity and is going to have to endure a series of hardships because of that.

Our work is focused primarily in Guatemala and Peru and we work in rural areas where most folks are day laborers or do some sort of farming often either as an employee of a larger agricultural operation or just to survive on their own. And these folks in the rural areas are usually somewhere between 5 to 10 hours or even a day away from the nearest town that has electricity.

So, let’s say on an average day someone could get up, go into the fields, work on their harvest, come home and then probably have between 30 minutes to one hour of sunlight left, if they’re lucky. Often they work until sundown because they’re using all the productive light they have. And then when they get home, as I mentioned, they’re using candles and kerosene, so the house is almost completely black. To move around from room to room they actually have to pick up this light source and carry it with them. It’s a very dark way to live, not just in terms of the amount of light but also in the quality of the connections you can build because if you think about the time you spend with your family in the evenings that is all predicated on having light to bring together the community and the family. Not that folks don’t do that but it’s just a little harder when everything’s dark.

David: I can’t even really imagine what that’s like.

Please listen to the episode for the full interview.

To learn more about the Global BrightLight Foundation or make a donation go to https://globalbrightlight.org/. Your gift will light a light.

This episode of Clean Power Planet is brought to you in partnership with the American Solar Energy Society. ASES advocates for sustainable living and 100% renewable energy. They bring scientists, policy-makers, business people and citizens together to share knowledge and community. You can join ASES at https://www.ases.org/.