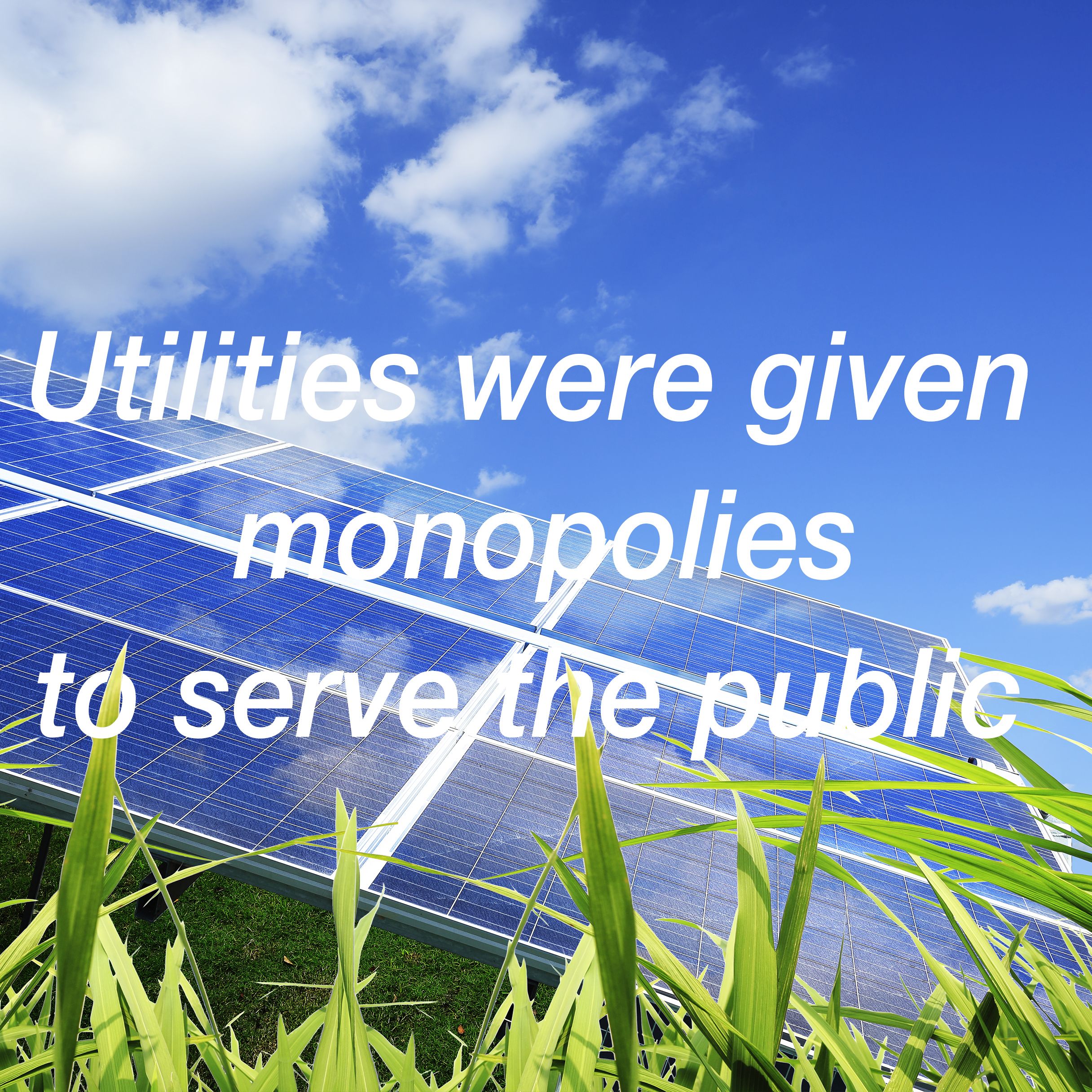 I’m really excited about today’s show. I’ll be joined by Todd Glass, one of the leading renewable energy attorneys in the U.S. He’s served as lead counsel on every possible type of alternative energy project including: photovoltaic, concentrated solar, solar thermal, wind, fuel cells, energy storage, biomass, hydroelectric, clean coal and hydrokinetic. We’re going to explore some of the ups and downs in the solar industry over the last several years and the challenges and opportunities that lie ahead. And finally I’ll conduct the least scientific focus group ever to get some feedback on the podcast and see how I might make it better.

The Obama Administration is committed to addressing climate change, promoting clean energy, and creating good paying jobs.  That is why the Administration is announcing a new initiative to increase access to solar energy for all Americans, in particular low- and moderate- income communities, while expanding opportunities to join the solar workforce.

The initiative includes executive actions and private sector commitments designed to make solar available for renters and people who don’t have the capital to invest in a system. Here are some of the specifics.

It’s definitely a big win for the solar industry and it should be good for the workforce. It’s also a step in the right direction for fighting global warming. I just wish Obama had done something like this earlier in his presidency. Maybe as part of the stimulus. It would have been a lot better than cash for clunkers. But there’s no time like today. You can get all the details on whitehouse.gov.

Okay. So let’s get started with today’s interview with Todd Glass

Todd is a partner at Wilson Sonsini Goodrich & Rosati and he chaired the Solar Power Finance & Investment Summit that I attended this spring in San Diego. I mentioned some of the many types of projects that he has been involved in but his contribution to renewable energy really goes beyond that. He’s a lecturer at UC Berkeley School of Law on energy project development and finance. He’s an elected director for the Solar Energy Industries Association (SEIA) and he also serves on the Cornell University Council Committee on Sustainability.

DB: Well thanks for speaking with me today Todd. You mentioned when you were kicking off the conference here that solar’s changed, it’s gone up and down over the years and I wondered if you could maybe tell us a little bit about the reasons for that.

TG: Sure, well obviously the solar industry has been being built in the United States over the last 40 to 50 years but in 2005, 6 and 7, that was the time of the real growth of the sector that we’re currently in. And in 2009 after the financial crisis the amount of financing became more difficult to locate and whatnot and if you looked at the conference as an indicator there was a lot of people milling about in the growth of that industry. It fell off a little bit and now this conference, which is I think one of the leading ones in solar finance and investment is back up to 600 plus people and the people that are here are dealmakers and it’s really good to see. It’s a combination of financing innovation, entrance to the market, a lot of people with tax appetite are here providing tax equity and evolving business models, so I think this is a very vibrant, exciting time but there are a lot of challenges as we look ahead over the next couple of years.

DB: Can you talk a little bit about some of those challenges? Of course the ITC…

TG: Sure the ITC step down at the end of 2016 into 2017. That will dramatically affect how solar projects are financed. Because the tax credit will go from 30% down to 10%. The second thing that you see is the rise of YieldCos and they’re buying up a lot of projects.

DB: “Yieldcos” are publicly traded companies that operate solar, wind, or other power-generation systems. They have customers that agree to pay for the power from those systems for 20 or 30 years through a power purchase agreement. So they have a very stable long term source of income and they offer good predictable dividends.

Sometimes Yieldcos are started by solar installation companies. For instance suppose you are Sun Edison and you build a couple of hundred pv systems on the roofs of Wal-Marts. Sun Edison owns and maintains the systems and sells the power to Wal-Mart. Sun Edison could keep the systems and make a nice income off of them for twenty years but if they want to grow and build a lot more systems they need cash so they bundle up all of the systems into a Yieldco and do an IPO. When it’s all said and done they probably still own a bunch of shares in the Yieldco and they continue to make dividends from the Yieldco but now they have cash to build more systems. They are shouldering the up front costs of the systems and selling the power to the customer so they need a lot of cash up front.

TG: If you look forward in the next couple of years you’re going to be looking at a different type of finance environment as interest rates rise. But I think probably the most exciting thing, and the first panel today was talking about it, was the changes in the regulatory environment. You have a number of states that are allowing competition with utilities at utility retail rates in a number of states and within those states there’s very vibrant competition for residential and even small commercial and industrial. There’s a number of other states that are simply not allowing it and still other utilities across the spectrum are starting to recoil against that competition and that’s what I was mentioning before. With the first antitrust lawsuit that has been launched I think we’re headed into some very dynamic regulatory and legal times for the solar industry as well.

DB: Todd is referring to a lawsuit that SolarCity filed against an Arizona utility. I think the best way to explain the suit is to just read an excerpt from SolarCity’s blog. This was from March 3rd, 2015.

Last Thursday, Arizona utility Salt River Project approved a new pricing plan designed to punish customers who choose to go solar. Under the new plan, SRP customers who generate their own power have to pay additional “distribution charges” and “demand charges” that other SRP customers do not.  These discriminatory penalties add up to hundreds of dollars per year, and make a competitive rooftop solar business impossible within SRP territory.

On Monday, we responded:  we filed a lawsuit in federal court in Arizona, asking the court to stop SRP’s anti-competitive behavior.

Here’s a link to the full blog post.  http://blog.solarcity.com/our-response-to-anti-competitive-behavior-in-Arizona

DB: Do you think that battle will be fought on a state to state level, or…

TG: Definitely. I don’t see the appetite in congress given its current level of dysfunction to really address things. The second thing that I would say is that retail, under the federal power act and under energy law in the United States, retail matters are reserved to the states, so it necessarily is going to be a state-by-state battle, utility district-by-utility district and whatnot and I think that the public utility commissions, their either appointed or elected officials as well as the staffs of those organizations and their lawyers are in for a very dynamic time because what you’re going to see is some of the things that happened in the late 90s and then when PURPA was invented or passed in ‘78 and in the early 80s.

DB: PURPA is the Public Utility Regulatory Policies Act. It was part of the National Energy Act passed in 1978 during Jimmy Carter’s presidency as a response to the 1973 energy crisis. It created policies that encouraged conservation, hydropower and cogeneration and it forced utilities to buy power from non-utility providers (if it was cheap enough).

TG: You’re starting to see some of the same flows. I teach at Berkeley Law School and one of the things I’ve been teaching my students over the last couple of years is that there’s an ebb and a flow and a cycle to energy law, and that in ‘78 when they passed PURPA and in the early 80s was really the birth of independent power in this country. Before that there was no independent power, it was all vertically integrated monopoly utilities. In the late 90s there was the rise in retail rates that gave rise to industrial customers, even commercial-industrial and residential customers, the demand for retail choice for their electric power, and this followed retail deregulation by FERC of wholesale markets as well as wholesale gas markets and electric markets.

DB: That’s very interesting and exciting and it seems to me that utilities were given monopoly status for cost efficiencies and not just to help the utility but to help the citizens right?

TG: Well I think that you bring up a very good point. I think that with the rise of new business models and technologies and new distributed generation opportunities what you’re starting to see is, there needs to be a focus on the consumer. Utilities were not given the monopoly so that they could maintain a monopoly status. They were given a monopoly in part of a regulatory pact to serve the public and I think the state utility commissions and their staffs and whatnot need to keep a focus on what the customers want and to not stamp out innovation of business models and potential competition because ultimately here, residential, commercial customers, industrial customers, they want choice and because of technological innovation there are new opportunities for choice. I think that it’s going to drive a different way and I commend the public utility commissioners and their staffs that are looking at what’s best for the customer.

DB: Well thank you very much. I really appreciate your time.

TG: You bet. Thanks

DB: It was great to have a chance to talk to Todd and get some insight into the future of the industry. Since the fate of solar will be decided on a state by state basis we really need to step up and let our voices be heard. (You can find out more about Todd on his LinkedIn page)

I want to take a minute to remind you that we would love to share your renewable energy story. Just email me at david at cleanpowerplanet.com. Tell me how you got excited about renewable energy and what you’re doing about it. Maybe your story will inspire someone else to flip the switch.

I’ve gotten some really nice feedback on the podcast so far but I feel like we have a long way to go and there’s always room for improvement. I wanted to run a little focus group and get some opinions. I’ve never set up or even been in an actual focus group. But I think you are supposed select people at random and get them to listen to an episode and give you their feedback by clicking a button or turning a dial. I went a different direction. I asked my next door neighbors and my family  what they thought. Check out the episode to see what the had to say and then please send your suggestions to david at cleanpowerplanet.com.