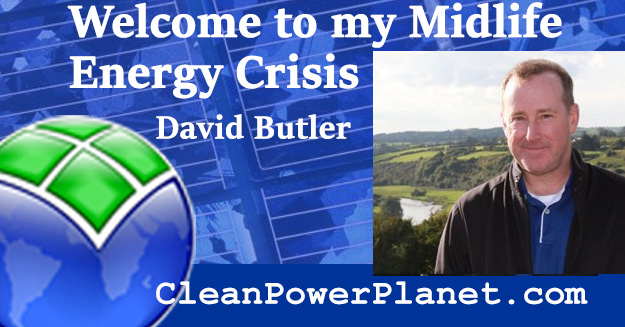 Hello and welcome to Clean Power Planet. I’m David Butler and this is the podcast for people that can’t wait to switch to renewable energy.

A couple of months ago my daughter asked me what I was going to do for my mid-life crisis. That is a very surprising question and she asked it in the same way she might ask a friend what they were going to do for spring break. I had never given it any thought and it never occurred to me that it was something that you could actually plan. So I started thinking about options and pretty quickly ruled out most of the stereotypical expensive ones that involved buying sports cars or boats.

At one point I was working toward being a solar installer. I took some classes and I built a few small systems but that’s as far as I got. I had been thinking about starting a renewable energy podcast but that didn’t seem like a very exciting midlife crisis. I wasn’t even sure how to make it a very exciting podcast since I live in Kentucky, which is probably in 49th place for solar capacity.

I thought, what if it wasn’t just a podcast but a crazy attempt to build a movement, a sort of Clean Power Community. What if I could pester a bunch of people into getting involved and find a way to raise money to put solar on low income homes? What if I could convince other crazy people in other communities to do the same thing?

Just to be clear, the goal is not to raise awareness or create buzz or educate people. I want to put up solar systems to generate clean energy. If I can do that then awareness will be a natural side effect.

So that’s my midlife crisis. If it works, it will be awesome. If it fails it should be pretty entertaining. I hope you will join me and if you just follow along to watch the train wreck, then that’s okay too.

Here is what I have in mind for the podcast. Each episode will feature an interview with someone who is doing something interesting with energy. I am hoping to pick their brains and get as much practical information as possible because I have a lot to learn if I am going to make this Clean Power Community happen.

The second part of the podcast will be an update on how my project is coming along. Have I been able to rope anyone into getting involved? How is the plan evolving? What have I learned? What progress have I made?

I’m really excited to introduce my very first guest. His name is Jack Barnett and he is the president of the Kentucky Solar Energy Society. Jack is an electrical engineer and he retired recently from a career in the telecom industry. I wanted to talk to him about what the solar energy society does to advance the solar industry in Kentucky. As we talked I discovered that he spent his telecom career at Bell Labs, the birthplace of the PV cell.

Please click the player to listen to my interview with Jack.

The podcast has been submitted to iTunes so you should be able to subscribe very soon.

2 thoughts on “Welcome to my Midlife Energy Crisis”