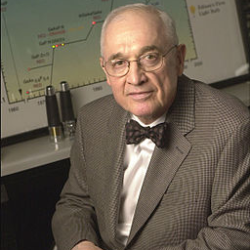 Nick Holonyak, Jr. was born in 1928 in Zeigler, Illinois. His parents immigrated from the Carpathian Mountains in an area that  is now in Ukraine but at the time it was at the eastern end of the Austro-Hungarian empire.

His dad’s family lived up in the mountains and his mom grew up in an orphanage in the valley. They didn’t meet until after they had both settled in Southern Illinois. Nick Sr. came to America in 1909 and found work in the coal mines. His mother didn’t come to America until 1921.

This story is featured in Clean Power Planet, A Renewable Energy Podcast, episode #19.
At home Nick’s father mostly spoke Carpatho-Russian while his mother spoke English. She also knew how to speak Hungarian but Nick’s father didn’t like it when she did. He considered the Hungarian’s invaders.

Neither of Nick’s parents had any formal education. His mother had worked as a servant in the priest’s home growing up but she was never taught to read or write. His father could write a little bit and by the time Nick was in kindergarten his mother had him writing letters to his dad who had traveled to Montana for a while to find work in a mine. Nick was expected to work hard in school and get good grades. The focus was on reading and writing.

After high school Nick worked on the Illinois Central Railroad. At one point he worked 30 hours straight. That convinced him to take the money he had saved and try to go to college.

He earned bachelor’s, master’s and doctoral degrees in electrical engineering from the University of Illinois at Urbana-Champaign. His advisor was John Bardeen, co-inventor of the transistor and two time Nobel Prize winner.

After he earned his doctorate he took a job at Bell Labs where he worked with John Moll on diffused silicon transistors and switches and metalized silicon. Their work created the foundation for the semiconductor industry and Silicon valley.

Then he went into the army. When he got out he went to work at General Electric’s Advanced Semiconductor Laboratory from 1957 to 1963. It was a very busy six years.

At the time there was a lot of work being done to develop a visible laser. A maser, the microwave forefather of the laser, was invented in 1953. But no one knew for sure whether visible light could be made into a coherent beam. And if it could be done would the human eye even be able to see it? A scientist named Theodore Maiman answered that question in 1960 by demonstrating a ruby-based laser. Maiman had taken a powerful incandescent bulb and used it to excite the electrons in a ruby. As the electrons drop back to their normal state they release a pulse of coherent laser light. But Holonyak wanted to find a way to create a laser directly with a semiconductor instead of by producing light with an incandescent bulb and amplifying it. A team at MIT had created a diode that emitted infrared light so he thought it might be possible.

Holonyak did succeed in creating a diode laser and in the process  invented the first visible spectrum LED in 1962. In the lab they named it “The Magic One” and wrote that on the back of the device. The diode itself was about the size of a piece of pepper. This became the red LED that was used everywhere for indicator lights. The tiny diode is encased in a plastic diffuser and that is what you see when you look at a single LED light. The red color was a result of the mixture of Gallium, Arsenide and Phosphide that was combined with Silicon to make the LED. Over the years different chemical mixtures have been found that create different colors.

Now those different colored LEDs are combined to make the white LED light bulbs that are rapidly replacing Thomas Edison’s original incandescent bulb. It’s kind of poetic that Holonyak made the discovery while working at General Electric, the same company that Edison founded with J.P. Morgan and Anthony Drexel. Of course when it was founded in 1889 it was called Edison General Electric Company but Edison’s name was dropped in a merger in 1892.

Nick Holonyak, Jr. has won many awards throughout his career. George H.W. Bush, George W. Bush, Emperor Akihito of Japan and Vladimir Putin have presented him with awards. But many people have stated that he should have received the Nobel prize for the invention of the red LED. In 2007 he responded to this by saying “It’s ridiculous to think that somebody owes you something. We’re lucky to be alive, when it comes down to it.”

Then in 2014 inventors of the blue LED received the Nobel Prize. The blue LED was significant because it made it possible to combine colors and produce white light. But it hardly seems fair to leave out Holonyak and others that laid the groundwork.

Nick Holonyak, Jr. chalked up 41 patents during his career and he’s still conducting research at the University of Illinois. He predicted that his LEDs would replace Edison’s light bulb eventually but he didn’t expect that it would take 50 years. Next time you’re in the grocery store grab a pack of LED bulbs in honor of Nick Holonyak, Jr.